We believe in the love for art without borders, that is why Sophia Romania was present at the event called “From Art to Business” organized by ROAZUR ART, in Cannes, at the Best Western Hotel on the 17th of May, 2019. Sophia store network is constantly developing, both in the country and in Europe. Every owned store or franchise has a story to tell, a story of the people behind these projects and designers who want to bring a touch of elegance and harmony in every home.

The Roazur Art event was a unique opportunity to establish new relations between the Romanian entrepreneurs from home or France.

Being started at the initiative of Annemarie Hoarau, established in France for 15 years, the Roazur project soon became the business association of southern France on the Cote d’Azur.

As a Repatriot member, Annemarie wanted to create as well new connections between the Romanian and French businessmen for a collaboration without borders.

The concept started as an undertaking of the entrepreneurs who want to change the image of Romania and to promote the Romanian businesses at international level.

Over the years, the Romanians have been perceived with various negative labels or connotations in all the European countries where they have arrived as emigrants. Unfortunately, the media channels did not promote the positive parts, the stories of the people who struggled to create a business outside their country, on their own with inventive and fresh ideas.

Being at the 3 rd year of international conferences, Annemarie Hoarau managed to bring together a team of Romanian entrepreneurs settled in France and Romanians who want to open a business abroad at the already known event – the Entrepreneur’s Cafe.

“I believe in cultural identity and I think that the roots of the Romanians should not be forgotten. Even if technology is more and more advanced, our origins remain there, no matter that we live in different countries. At Roazur I wanted to give life to a dream of 15 years, to change the image of Romania abroad. Two years ago, after a conference at Repatriot, I had the energy and saw the possibilities to speak to the foreigners and Romanians in France about the value of the Romanian projects. I started with family businesses, with Romanian wine tasting from the good kept vineyards and I wanted to go further with projects that deserve to be known all over the world. Roazur is a great family, who supports innovative ideas and daring projects, regardless of the professional field. ”

Starting in January 2018, Roazur has gathered within the conferences, hundreds of entrepreneurs who presented their personal business, designed products, as well as creative workshops for those who want to start a business.

The Romanians were pleased and supported this far-reaching project, concluding an open-minded community, eager to bring new collaborators. Established on December 1, Roazur Association is an opportunity to create a better image for the Romanians and to bridge the cooperation between Romania and France.

The presence of Sophia team at Roazur Art event is a reason for joy and union. Sophia concept reveals on this occasion, through a new marketing presentation, putting forward the chances of opening a successful business through international franchises.

With a minimum investment of 15,000 euros and a franchise fee of 3000 euros, one can own a growing business with the most elegant collections of curtains, voiles and custom-made fabrics.

The voiles, curtains, cushions, blankets and upholstery are custom-made, using original collections for each season. The combinations of fabrics and styles matching have led to a fusion of decorative materials that have conquered the hearts of Romanians everywhere. Sophia franchises are part of a chain of 24 stores, both in Romania and London, the concept being in search of new investors or collaborators.

The presence of the founder of Sophia, Anamaria Stefan Georgescu, and her husband, Cristian Georgescu, development director, who deals with the technology of the company, aimed at finding partners to extend the franchise network on the Azure Coast. As a novelty, Sophia has created in the last two years a full-fledged ERP (Enterprise Resource Planning) system, and by attending the Roazur Art event it was intended to be found an investor in order to customize and develop the system for other clients also. Sophia undertakes to decorate private residences as well as hotels, hostels and restaurants, with personalized products made in Romania.

We invite the Romanians living in the South of France to join our franchise network in prolific collaborations that preserve the unity of the Romanian people from home and abroad.

If you want to start on this road, of having a business in the interior decoration field, you can contact us at 0756 075 273, or by email at export@sophia-concept.com. 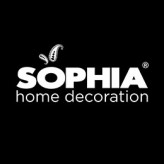